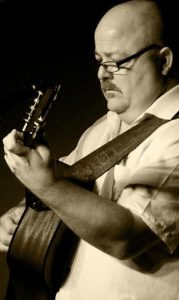 Jim Hurst  – His unique picking style and mastery of bluegrass guitar wows audiences and is revered by both novice guitar players and his musical peers. His eclectic career has made him a remarkable performer, and experienced instructor and a highly sought after session musician.  His affability and gregariousness make him one of the most approachable musicians of his caliber.

Itching to play more bluegrass, Jim joined the Grammy nominated Claire Lynch and her Front Porch String Band in 1995 where he teamed up with kindred spirit bassist Missy Raines. While with Claire Lynch, Missy and Jim formed a duet, creating ground-breaking arrangements. They earned IBMA Guitar and Bass Player of the Year for 2001 and 2002.

In 2010 Jim left the Claire Lynch Band to pursue a solo career. He produced a number of solo works; Open Window, Second Son, A Box of Chocolates, Intrepid and in 2014 Looking Glass. Jim’s virtuosity consistently sways audiences with his deft finger work and smooth vocals. He performs with his current band The Jim Hurst Trio and teaches at guitar workshops and music camps in North America and Europe. For more info check out his website http://jimhurst.com