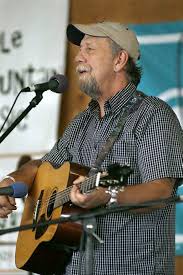 Elliott Rogers  As a former student at Camp Bluegrass, Elliott Rogers is very familiar with the concerts and jams that make it a unique and fun experience. Several years ago, Elliott began teaching at the Camp, and his many students can testify to the contagious spirit of fun and learning that Elliott brings to his workshops in rhythm and lead acoustic guitar. Elliott taught himself how to play guitar from an easy Beatles book when he was very young, but when he heard a Doc Watson album borrowed from a friend’s mother, Elliott was profoundly moved. During the mid-70’s he kept listening to a variety of music recorded by Dan Crary, Jim and Jesse, Jackson Browne, Taj Mahal, and the Nitty Gritty Dirt Band on their iconic bluegrass album of the 1970’s, Will the Circle Be Unbroken. At age 17, Elliott ventured out to his first bluegrass festival, the 3rd annual Colorado Rocky Mountain festival, where he first saw Bill Monroe, Jim and Jesse, and the Country Gazette with Alan Munde. Elliott couldn’t imagine at that time that he would one day be playing guitar in a band with Alan Munde. After a hitch in the U.S. Army at Ft. Hood, Elliott moved to Austin where recorded with Robert Earl Keen, Lyle Lovett, and Nancy Griffith. He shared the stage with John Prine, Buckwheat Zydeco, Blaze Foley, and many others. Elliott continues as  a celebrated songwriter and guitarist in the Austin area.